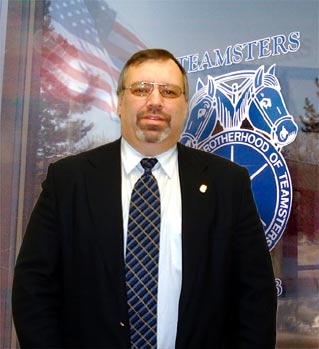 Rick has been a Teamster for more than 35 years. He first worked for Perini Power Constructors at the Seabrook Power Plant and then for City Concrete/Aggregate Industries in Exeter and Portsmouth, NH. He also spent time with Blue Line Express and Gypsum Haulage. Rick was an elected Shop Steward at Aggregate, having served for 16 years in that capacity.

Rick first served on the Local Union Executive Board as a Trustee in 1999. He then was elected Recording Secretary in 2000. In 2006 Rick was elected to the position of Business Agent. He also serves as Sergeant-at-arms for Joint Council 10 in Manchester, NH. He was a Sergeant-at-arms for the International Conventions in Philadelphia PA in 1996 and Las Vegas in 2001 and again in 2006. He was elected as a delegate to the 2011 Teamsters National Convention.

In the past, he has been a delegate to the NH Building Trades Conventions and now sits on the Executive Board of the NH Building Trades. Rick has attended the Teamsters Leadership Academy seminars in Washington, DC. Some of the many boards and panels Rick sits on include, the New England Teamsters Federal Credit Union as a Board member, the Eastern Regional Joint Area Committee freight panel, a member of the Tri- State Arbitration Panel, alternate member of the NH Penalty and Appeals Board for the wage and hour division. Rick also serves as the Organizer for the Local Union

In addition, Rick is a member of several civic and fraternal organizations including the Sons of The Legion and Moses Paul Masonic Lodge #96. Rick is also a publicly elected official having been elected and re-elected for several years as the school district moderator for the towns of Durham, Lee and Madbury.

He enjoys bringing his second-generation Teamster experience to others.