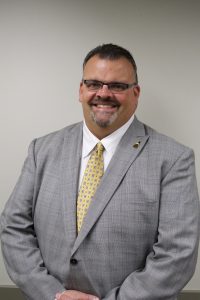 Jeff joined Teamsters Local 686 as a Seasonal Shipper/Warehouseman with Continental Baking Company in 1986, and became full-time in 1987.

In 1991 Jeff became a Route Sales Representative for S.B. Thomas
(Thomas’ English Muffins), and in 1993 he was elected as Chief Shop Steward for all Thomas locations in Massachusetts representing approximately one hundred members.

In addition to his duties as a Business Agent for Local 633, Jeff works for Joint Council 10 as a Field Representative, and serves as Secretary/Treasurer on the New England Bakery Drivers’ Council.  He is a Policy Committee member for the Teamsters National Bakery Conference, and he serves as Trustee for the New England Teamsters Bakery and Sales Drivers Savings and Investment Plan, as well as the New England Teamsters Bakery and Sales Drivers Severance Pay Plan. Jeff serves as a Local 633 representative on the Multi-Plant Grievance Committee Arbitration Panel, as well as Chairman of Tri-Sate Arbitration.

Jeff coordinates Local 633’s school to work initiative working with school age children from elementary through high school and college regarding the benefits of belonging to the Teamsters.