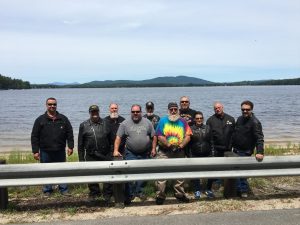 On Saturday, July 29th, Teamsters Local 633 Business Agent Rick Laughton joined a group of members, retirees, and guests on a day- long ride through the Lakes Region. The ride started at the Union Hall in Manchester, NH and the group completed a 200 mile loop through the Lakes Region. Some of the lakes visited were Winnipesaukee, Wentworth, Lovell, Squam and Province. It was a perfect day for the ride with clear skies and dry roads. The lakes were in sight most of the day starting in Alton into Wolfeboro, then heading east through Wakefield to the Maine state border before looping north to Ossipee. The group enjoyed lunch together at the Yankee Smokehouse. The ride then continued from Moultonborough to Laconia and Belmont before heading back to Manchester. A great time was had by all and plans may be in the works for another ride in the early fall.   If interested in joining a fall ride, please reach out for Rick Laughton.