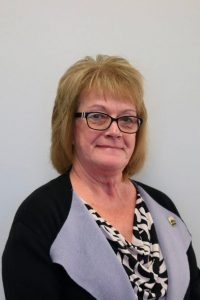 Donna’s career as a school bus driver began in 1988, when she was employed by McGregor-Smith which was later sold to Laidlaw International. In 1998, the drivers voted to be represented by Local 633 and Donna became a steward. Laidlaw sold the operation to First Student.

Donna has been an active Teamster and vigorously campaigned against the anti-union Right-to-Work Legislation. In addition, she continues to support reforms to the unemployment law to benefit workers.