WMUR reported on the issues concerning the proposed opening of the new Women’s Prison. The numbers put forth by the state refer only to the Women’s prison and did not address the severe shortages presently occurring at all the facilities. Jeff Padellaro and the Teamsters are continuing their efforts to educate the legislature and the public of the staffing crisis happening presently which will only be exacerbated by the opening of the new prison for women. See www.safeprisonsnh.com

This case involves a regular full-time 22.3 Teamster who, unfortunately, was hurt on the job last year while working out of the company’s Nashua, NH facility.  He recovered to the point that his own doctor cleared him to return to work in January of 2017 but that wasn’t good enough for UPS. They delayed his return by 21 days and, in the process, he was denied compensation he would have earned if UPS simply followed Article 20 of the contract. Teamster Business Agent Kevin Foley stepped in and helped.

“For years, when UPS violated Article 20 in terms of the 3rd doctor procedure thereby delaying our member’s right to return to work after an injury, whether work- related or not, they would do the right thing and pay the grievances. Recently, with the new UPS, they adopted the delay, then deny, payment approach. Local 25 just arbitrated a similar case and won which was a huge victory for all our UPS members in the U.S. In this case, like the Local 25 case, there was no affirmative contractual defense for the company. The negotiated language is clear and must be followed. Historically, the reason the Union proposed this language and demanded UPS agree to it at the table years ago was because they were doing things like this to our injured UPS members.  In this case I filed a grievance for our member and I got him paid the difference between what he received while on workers’ compensation and what he would have earned had UPS not violated the contract for those 21 days, plus his Health and Welfare and Pension contributions.

Let me be clear, once our UPS members are cleared by their doctor, the contract is clear: UPS has three (3) days to get him/her to the company doctor or we go to a 3rd doctor to settle the matter within ten (10) days.  The company in this case simply ignored the Union’s request for the 3rd Doctor, causing a violation and triggering the Union’s grievance. If the 3rd doctor agrees with our member’s own doctor, UPS must back pay to the date our member was cleared by his doctor.  If, alternatively, the 3rd doctor agrees with the company doctor, there would be no liability on the company’s end. It’s important that if you should get hurt on-the-job, you report it right away and seek medical treatment through the doctor of your choice. If there are any problems at all you should be calling me directly at my office 603-625-9731 Ext 18 for assistance.” 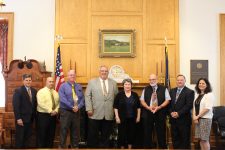 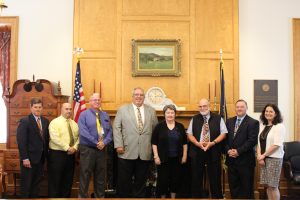 Keith Judge, Teamsters’ Field Representative, visited the Associated Grocers facility located in Pembroke at 12:30 a.m. on July 14, 2017, to meet with our Teamster members. Keith was joined by Steward Rich Charity, a 5- year employee of AG, in meeting with the drivers as they reported for work. As always, the Teamster representatives wanted to hear from the members regarding any concerns or questions they may have had. Each driver was handed a printed copy of their new Collective Bargaining Agreement which is in effect from February 26, 2017, through October 15, 2021. Keith Judge, with the assistance of Business Agent Rick Laughton and the negotiating team, successfully negotiated a contract that included substantial raises while protecting their Health Care and Pension Benefits.  Keith and Rich remained onsite until 6:00 a.m. in order to personally talk to every Teamster driver who was scheduled to work that day.  Prior to becoming a full-time Field Representative for the Teamsters, Keith Judge worked at AG from 2006 through 2015.

Jeff Padellaro has made the Governor aware, through direct communication, that the current staffing levels of the Department of Corrections are unacceptable. The overtime necessary to maintain critical staffing for the Concord facility on July 8th and 9th was beyond unacceptable. On the 8th of July over 49% of the posts were filled by officers working overtime; on July 9th, over 47% of the posts were filled by officers working overtime. The majority of those officers are forced to work double shifts several times a week. The men and women who work for the Department of Corrections are dedicated professionals who have continually reported to work knowing that their 8- hour shift will more likely than not result in an 16- hour stay. The state has failed to recruit a sufficient number of recruits to reverse this dangerous trend. The only way to increase recruitment in this tough and dangerous profession is to offer a compensation package that is comparable to other law enforcement opportunities that exist in NH or close-by in Massachusetts.  Jeff Padellaro, along with your negotiating team made up of veteran COs, will continue to educate the state and the public regarding the need to properly fund this department and support the men and women who make it work.